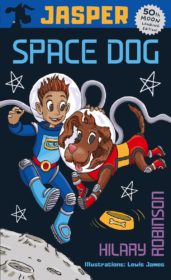 Mixing facts about space travel with hilarious ideas about the moon, Jasper Space Dog was selected as Love Reading4Kids Book of the Month in April and described by Julia Eccleshare as a book where “there’s much to enjoy as well as much to learn from this introduction to an important topic”. Hilary will be taking part in several events to mark the Summer Reading Challenge the theme of which, this year, is Space Chase.

Charlie Tanner's dog Jasper thinks he's descended from Viking dogs and is determined to find out more. This sparks a series of very funny letters from Charlie to the curator at the local Viking museum, in which Charlie poses questions from Jasper. In fact, questions and answers tell us lots about Viking life and the unusual and ingenious presentation makes it all extremely readable and accessible. A great way to learn about the Vikings. Jasper has explored space for readers too, and it looks he has more adventures to come, which is good news.